Slice of Life: Lessons from Grandma 21 of 31 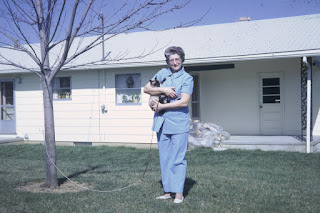 Straightening up the house, I came across a gift bag with some tissue paper. Pulling the tissue paper out, I began to straighten and fold it in hopes of using it again. "My grandma would be so proud," I thought to myself as I finished the task.

My grandma, a small child during the depression, learned to be frugal by necessity. She would talk often about how hard those times were for her family. Her father passed away in 1922 leaving her mother with three small children and one on the way. By the time the depression hit, her family was already working to make ends meet. Grandma would often talk of visiting her grandparents in that time. They would give her a big thick cut of bologna. When she'd tell the story, I would find myself wanting some bologna.

Each year, I stayed with my grandparents twice. We would stay for a week in the summer and for a good stretch over Christmas break. As I grew older, I marveled at the way the depression had stayed with my grandma. It shaped so much of what she still did. Grandma cooked just the amount of food that would be needed. You could guarantee that if she had any leftovers it would be reheated, reused to make something else, or placed in her freezer. Nothing was ever thrown out.

When it came to using resources, Grandma was before her time. It wasn't so much about the environment (at least I don't believe she considered those ramifications), but instead about not wasting anything. She didn't buy fancy plastic containers even though Tupperware was all the rage at that time. Instead she kept a stack of old cottage cheese and sour cream containers to store any leftover. As for foil, not everything got a new piece of foil as Grandma carefully folded the foil and placed it back in a drawer for later use.

When I would take a shower at Grandma's house, I would be reminded once again about her ability to save. Grandma watered her shampoo down for use. This would make a bottle of shampoo last so much longer. My thick hair was never a fan of this practice. Honestly, I was quite sure I used more soap in this way. However, I think it spoke to the lessons of conservation she learned growing up in such a time.

These practices were also a part of our holiday celebrations. At Christmas, I would sit on the floor between my sets of grandparents. As we would open gifts, my grandmas would collect all of the bows for reuse. It was quite a game each year. Which would win? Green? Red? Blue? Gold? Of course, I have a hunch the same color won each year as my grandma packed up the bows at the end of the morning to reuse the next year.

Today, I live in a different world. Any waste we try to reduce seems to be more about the environment than the amount of money we spend. Yet, Grandma's lessons have stayed with me. As I've grown older, I have come to understand not only the reasons behind the ways my grandma lived, but also come to consider them in my own decision making. So sometimes, like this day, I fold a little tissue paper back up, re-crease a gift bag, or place an old cottage cheese container back in the cupboard and think of my grandma.

My grandma was born 104 years ago today. It is not only these lessons that have stayed with me across my lifetime, but so many more wonderful memories I have of her. This wasn't the post I started to write to celebrate her birthday, but it is the one that came to me today. There are so many other stories I carry close to my heart that will be good writing for another day. 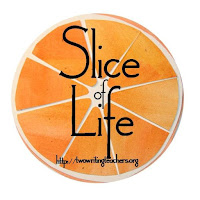