- March 11, 2018
For the month of March, I'll be writing with the Slice of Life community. Disclaimer: I'll be writing every day so the writing will be a bit unpolished most days. Thanks to Two Writing Teachers for bringing this community together and for inspiring me to try to find the stories that surround me each day. 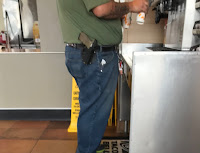 I shouldn't have stopped, to begin with, that afternoon.  There's really no need to have a burrito and taco supreme at this point in my life.  The excessive calories just don't disappear like they once did.

I shouldn't have stopped, but I did.

After placing my order, I sat down to wait for my food to be ready.  There were several people standing and waiting as well.  The drive-through was also busy so it seemed to be taking forever.  That's when I noticed it: a man to my left with a gun on his hip.  Surely I was mistaken I told myself trying not to stare.  I took a second look.  Nope, for sure, a gun on his hip.

I became very uncomfortable.  I live in the midwest, guns for hunting are a pretty common thing and I'm quite sure most of my neighborhood probably has a gun tucked away in their house for extra protection.  However, a gun in a restaurant just wasn't making me feel comfortable.  I'm too familiar with the thinking these days shared by many; this gun might save us all from the next one that comes into the establishment, but I don't share in that thinking.  I saw this gun as increasing the likelihood that something could go wrong quickly.

At the moment I realized the man had a gun, I should've left.  I should've asked for my money back or, for that matter, I should have just kissed that $5 goodbye.  Afterall, I shouldn't have stopped anyway, but the cashier had been so kind earlier and I didn't want to make a scene - though my blood was starting to boil.  I moved to the other side of the restaurant, keeping my eye on this man with a gun.

Oddly, this isn't the first time I've experienced a man with a gun in an establishment on my side of town.  It wasn't all that long ago that the same thing happened as I was having coffee with a friend.  I've done a little research to learn we have an open carry law in our state, as do most others.  Who knew?  Well, apparently, everyone but me.  I've lived a long time and not seen a gun come into a place on someone's hip, but these are different times.  I suppose it is fear that makes this our new reality.  I'm starting to wonder if this is the reality everywhere, or just where I live.

I've decided that in the future when I see a gun on a hip, I'm making it standard procedure to leave.  Sadly I may not have many rights in this situation, but I do have the right to leave.  If I would have had a child with me, I wouldn't have thought twice, I just would've left.  It's 2018, not the wild west, and I didn't really need that burrito.