Slice of Life: Selfie Challenged 3 of 31

- March 03, 2018
For the month of March, I'll be writing with the Slice of Life community.  Disclaimer:  I'll be writing every day so the writing will be raw and a bit messy most days.  Thanks to Two Writing Teachers for bringing this community together and for inspiring me to try to find the stories that surround me each day. 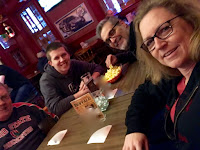 "Everybody, lean in," I say, trying to find the sweet spot for my camera.

"Wait, I can't see all of you yet," I tell my dad, husband, and nephew, trying to capture the four of us gathered at our favorite weekly hangout.  My husband tries to lean a bit more toward the center of the table.  Nope, I still don't have it.

"Hang on," I follow, trying to get everyone in the camera frame.

"Almost," I add as I try to extend my arm as far as it will reach.  I'm rather tall, but no matter how far I extend my arm I still can't get the four of us in the picture.

I wrestle with the camera and then try to remember which button on the side snaps the picture when you aren't using the screen.  Is it the volume?  The power button?  I give up with a sigh.  Another attempted selfie unsuccessful.

Selfies, I just can't take them. 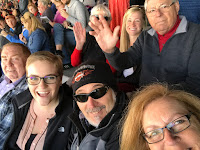 If you've ever been with me when I try to turn the camera around to take a selfie you know it's true.  It's not really the selfie I'm after, but the "usie" as I heard Katie Keier call them one time.  You know, that delightful group shot where you're holding the phone and all of your friends gather around to get in the picture.  I watch people do it all the time.   They hold out their phone, their friends cluster around them, and bam - a great picture.  Not me.  It's just a skill set I don't possess. 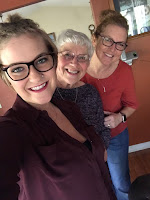 Apparently, the skill isn't naturally acquired for everyone and doesn't run in families.  My daughter can rock a selfie.  She's been doing it for years.  She'll pause in the house, in the car, at dinner, just about anywhere and grab that selfie.  She has a million different facial expressions she uses to take it up a notch.  Honestly, the only good selfies/usies I have on my phone are the ones she took.  When we're out I'll attempt to take a picture of us together; eventually, we end up laughing so hard that I pass the camera to her and she snaps a picture shaking her head at my inability to master this simple skill.

On Facebook and Instagram, I'm always a bit envious of the group photos people have snapped holding their phones in selfie position.  I've seen friends take a selfie of a group gathered around them.  I've seen friends snap a picture where they're in the front and then, at a bit of a distance, the group can be seen in the background of the picture.  Sometimes this is two or three people, but I have a few friends who somehow manage these great shots with groups up to ten.  Really, it's a gift I don't possess.

By now you're probably thinking, "Just buy a selfie stick," but that will never happen.  Those sticks are big and bulky, and would only amplify my problem as I pull it out of my purse.  I guess I'll just continue to hand my phone to some kind some stranger and say, "Do you mind taking a picture of our group for me?"