Slice of Life: A Familiar Pattern 5 of 31

- March 05, 2018
For the month of March, I'll be writing with the Slice of Life community.  Disclaimer:  I'll be writing every day so the writing will be a bit unpolished most days.  Thanks to Two Writing Teachers for bringing this community together and for inspiring me to try to find the stories that surround me each day. 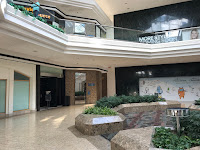 My brother needed some new jeans so our family piled into our 1977 Pontiac and headed to our local mall.  Recently covered to make shopping in the winter a bit more bearable, a trip to Sears was usually our first stop for items needed.  My parents, both working for Sears at the time, had a discount that made purchasing items there much more affordable.

The mall was about fifteen minutes from our house.  A quick turn into town, down the national road, through six traffic lights, and we were there.  Piling out of the car and into the store, my mom masterfully found the pair of pants, purchased them, and our errand was complete.  With the mall now covered, it was much easier to talk the rest of the family into walking around a bit before heading back home.  Whether it was winter with the snow falling outside or summer with the humidity index climbing, the mall was now a place to get out of the elements and walk around a bit.

For years, the mall continued to be a favorite place.  In my teenage years, my friends and I would often have a parent drop us off for a few hours.  We'd walk around; maybe have lunch at Lazarus or grab a drink at Orange Julius.  When I got a job and learned to drive, the mall was often the place I went to pass a little time or make a new purchase.  Years later, when my kids were little, the mall was in its decline, but it was the perfect place to go see Santa as there was never a line.

Of course, times change.  Investors eventually built another mall not ten miles from this one.  This mall had two floors of shops all inside the large structure.  No rain.  No snow.  And a lot of new shops.  New places tend to draw people in and everyone started going to the new mall.

Slowly shops at the old mall started to reduce merchandise and began to close one by one.  It wasn't long until the old mall that had been such a part of my younger years, closed its doors.  I missed the ability to quickly run into that mall to pick something up, but even I had spent some time at the new mall with its unique shops.

Fast forward several years, and yesterday I decided to go to the once "new mall" to walk around a bit.  Living in the midwest with its long months of cold, the mall is often the perfect place to get a few steps in when winter is making you crazy. Yes, this is the very mall that likely was a factor in the eventual shut down of the mall from my childhood.  In the last two years, every time I go to this mall a different store has closed.  Since the closing of Kaufman's, a large anchor at the time that has yet to be replaced, the mall has been in steady decline.  As a result, many stores, especially on the end with the missing anchor, have closed as well.  Some of the areas remain empty with a sign at the door that space is available.  The mall now has, I don't know how many, generic sports stores, game stores, and other novelty shops that probably won't stay for long.

Though I'm sure the decline is complicated by the increase in online shopping, I've seen this pattern before.  Unless the ownership of the mall can get crafty, I know it's just a matter of time before this mall closes as well.  Interestingly, there is a kids' play section in this mall that is always packed.  With an ice-cream shop and pretzel store located beside it, many people are there to let their kids play a bit.  I'm hoping they'll figure out a way to change things up to get people to the other end of the mall and help it to grow again, but I'm not optimistic.

In the last ten years, two new malls have been built about twenty miles from this once "new mall," each with a new collection of big name stores and peppered with unique high-end shops.  Yep, a pattern for sure.