This morning is my husband, Jeff's, last day with kids. It isn't just any last day, it's an Alice Cooper last day:  "School's out for summer, school's out forever." While Friday is his official last day, I know his last day with kids feels like the final day of his career. He retires at the end of this week. In 36 years of teaching, he's enjoyed every day with those crazy 8th graders. Thirty-six years in the same position. Thirty-six years and the only classroom move was because they tore down the old middle school and built a new one.

At the beginning of this pandemic year, I encouraged him to go ahead and retire. I mean, (shhhh!) he wasn't getting any younger and the virus seemed unrelenting. "I want to see what the year brings," he said confidently and headed off to a new group students and a year of ever-changing circumstance.

This morning my phone has been buzzing with updates. I just received a video his students made, #JeffTok, to celebrate his work, the career of the school's principal who is also retiring, and these eighth graders that are soon headed to high school. What an interesting middle school experience they have had. They will have better stories than the "we walked uphill both ways in the snow" crowd.

The #JeffTok was a series of short skits (TikTok-like) the students had created. It's really fun to watch.  I watched a skit of a student being called on in class, but stuck on their phone watching #JeffTok, one of a bunch of students dancing in ties (Jeff's worn one religiously for 36 years), an award being given to the principal (her 35th win), and The Fresh Prince of [Our Town]. I was stopped in my tracks by a song one of the 8th graders played on the piano while singing to Olivia Rodrigo's, Driver's License. The lyrics were changed to talk about this year they've experienced. As I listened to her sing about the massive amount of testing they have just completed, missed dances, remote instruction, and the cancelled traditional 8th grade trip to Washington DC, I realized how hard this time has been on the kids. I knew it, but hearing a student sing about it really amplified the truth. 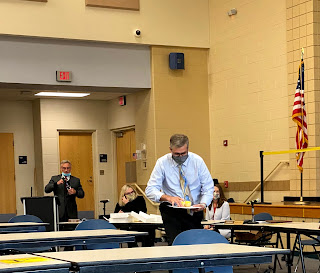 The year has been a hard one on students and educators alike. While the government created narratives, school leadership tried to survive, and parents argued relentlessly, teachers and students just tried to make it work the best they could. Jeff, like so many teachers, went into the year to try to make it the best year possible in this unusual situation. I know this isn't how he envisioned his last year of teaching, but he went into this year, just like all of the years prior, to do the best he could to make it a great year for his students - and to enjoy a group of students in their final year before high school. So as his student wrote in her song, 'This year wasn't perfect, but at least we all survived together."

Today is his last day with students; some of them are the children of students he has had in the past. Last days of a school year are always hard as we say goodbye to students, but I'm sure this one will be a little bittersweet. Yes, school's out forever, but there is much to celebrate. The impact of his time alongside students will be felt for years to come. There aren't many people who have the gift of going to a job they love each morning of their career, but I know that Jeff has been lucky that way. Students, like the ones who took the time to make this video, make every day a delight. At the end of the day, he'll turn off the lights to a classroom that has been filled with joy and stories he'll carry into this next chapter. Congratulations, Jeff.