Slice of Life: It's Been a Long Time, Brood X 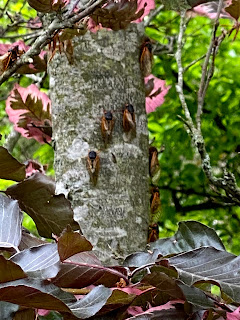 The sound is incessant as the cicadas fly from tree to tree. I knew they were coming, but I guess I had forgotten what it was like. Maybe it's the first time I've had enough time to really pay attention - or maybe it's that they've interrupted my patio time. Maybe I just chose to wipe the memory from my mind. This is the fourth time I have been around for their visit. The first time I was much too small to remember, the next I was probably living the life, the last time I was quite busy with the day to day life of raising a family, and this time I'm well aware of their arrival and look forward to their quick departure. 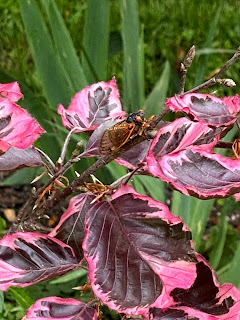 I try to remind myself how exciting it must be to be out and about after growing and sleeping for 17 years (learn more here). I mean, we're all pretty excited to be out and about after being home for most of the last year due to COVID. Just multiply that joy by 17. A lot has happened since they arrived last. Facebook was just beginning in 2004 when they last joined the party on earth. If anyone caught images or video at that time to post, I haven't seen it. Their last arrival preempts the iPhone introduction so I'm sure we weren't popping pictures and video like we do now. A quick analysis would likely find that they have had starring roles on social media this time and have been the focus of many clicks on Google.

In 2004 gas was 1.88, but I doubt the cicadas really cared. Cabbage Patch kids were still in and Dora was busy exploring. The Nintendo DS was released. Justin Timberlake was Bringing Sexy Back while The Fray tried to tell us How to Save a Life. In 2004, we would Meet the Fockers and go on 50 First Dates.

The world's been busy. Since Brood X visited 17 years ago, there have been two new popes. The United States has had three presidents in this timeframe. Katrina devastated New Orleans.  We lost Superman in 2004. Quieting cicadas seems a job for a superhero. We also lost greats like Johnny Carson, Prince, Robin Williams, Mary Tyler Moore, and so many others that have entertained us. Sadly, we became numb to gun violence. While the Paris Agreement was put in place in this time, the United States pulled out of it in this time as well - and we're back. I'm sure the cicadas would prefer we stay on track with our climate work. They would like to come back in 17 years.

A lot has changed for me since their last visit. At the time of their last arrival, I had three small children running in the yard. I don't remember the cicadas flying around our yard as much then, but I do remember driving down the highway in the southern part of Ohio with cicadas just smacking my windshield. This tragedy apparently didn't slow down the recurrence as there seem to be plenty here this time around. I've switched teaching positions four times since their last arrival and retired just before they came back. My three small children have now grown into their own lives and two very small grandchildren are beginning to crawl around. (I'll be protecting them from the cicadas. LOL)

It seems these six legged tourists will be with us for 4-6 weeks so I might as well get used to the unceasing hum and the cicada carcasses that cover the ground. I hope they don't destroy too much of the property. If you're looking for me, I'm probably inside marking the days on the calendar until they crawl back into the ground. After this, we won't see this group until 2038. I'm not going to think about how old I will be then. I'm just going to focus on the years of quiet in between. 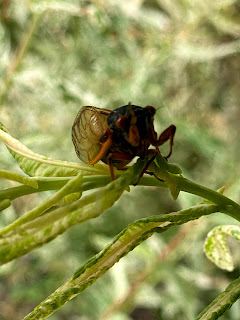