Pancakes or Waffles? Slice of Life Challenge 4 of 31 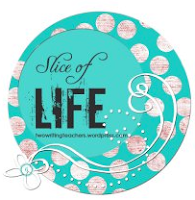 Slice of Life Challenge 2013
Memory Monday.  During this year's challenge I'm trying to write more from something I notice during the day.  I'm trying to make myself pay more attention to the writing possibilities that happen across the day.  My plan, right now anyway, is to make Mondays the day to write about something from a memory.  Today's slice is about my grandma.

Every summer we'd pack our suitcases with all we would need and jump into Grandpa's car to drive forty-five minutes to get to my grandparents' house.  Even at eight I knew every part of that drive in my head.  I knew every sign that I was getting closer.  First the water tower near the freeway, King Arthur's Restaurant, past the town where my aunt and uncle lived, then the State Highway Patrol station, and finally the hills.  The hills quilted with trees were the best sign.  The hills meant we were almost there.  It was hard to sit still as we got closer and the excitement began to bubble inside me.

Grandpa would pull the car into the small garage.  It was all we could do to wait until he turned off the engine so we could bound out of the car, grab our luggage, and race to our rooms.  We'd set up camp for the week.  Grandma had spaces and places for all of us.  Grandma kept her house as neat as a pin.  Everything was in its place and there was a place for everything.  Her house smelled like heaven to me;  a combination of clean and home cooked meals danced in the air.

As soon as you walked in the door you quickly fell into the rhythm of Grandma's schedule.  With Grandma, there were certain things you could count on each day.  You knew what time you were getting up and going to bed.  You knew each day would be filled with well planned adventure.  You knew you would be expected to help, but you didn't mind because working with Grandma never seemed much like work.

Of course, we all knew that there would be three good meals and a few snacks tucked here and there across the day.  There wasn't a meal I didn't love at Grandma's.  Spending the week with her meant pot pie, roast beef, mashed potatoes, fried chicken, homemade mayonnaise, and orange cookies.  Spending the week with Grandma meant the toughest decision to be made each day would be whether to have waffles or pancakes for breakfast.  Myself, I was a fan of waffles.  There was something about filling the little squares with butter and then pouring syrup, hot from the oven, over each tiny hole.  There was something about watching the butter melt and tasting the sweet goodness as Grandma laughed and talked in the kitchen.

You really couldn't lose.  If outvoted, the alternative was pancakes.  Grandma would get out her pan and pour small silver dollar pancakes.  You knew when Grandma made pancakes she was going to make some small itty bitty pancakes and toss them onto someone's plate.  I'm pretty sure that someone was usually my cousin, Jen.  Those pancakes were no bigger than a penny, but each of us hoped we'd be the one to have them.

My parents would arrive at the end of the week to take us back home.  We'd say our goodbyes and get into the backseat of the car.  My grandma would stand on the front porch with my grandpa, arms waving farewell.  We'd shout and wave and blow kisses until they were out of sight.  The hills, the State Highway Patrol station, the town where my aunt and uncle lived, the water tower and then on toward home.  Looking back I'm thankful for the time at Grandma's.  I'm thankful for picnics, Old Maid games, and times at the lake.  Pancakes or waffles?  It didn't matter, they were equally sweet.