- October 21, 2014
It's Tuesday so stop by Two Writing Teachers to join tonight's link-up and conversation.  There's something about moving from blog to blog to savor the little stories that make us smile.

As a teacher, I always wonder what my students will remember about me.  My hope is always that students will see their light reflected in my eyes; that I will in some way help them to see all that they can be.  In my years as a student I was fortunate to have many teachers who touched my life in different ways.  I like to think each one played a part in shaping the person I am today.  Today I stay in contact with many of these teachers who helped paint my childhood in possibility.

Today I came home to the unfortunate news that one of my teachers just passed away.  It was sad to hear that my fourth grade teacher had lost this last battle, but he had triumphed so many times before.  Though he will likely never know it, he taught me much.  When I think back, he is one of the first teachers I knew who truly believed in me.  Even today, many of things I have become are a result of the light I saw in his eyes.

Though I no longer act --- thankfully --- he taught me to push through tough situations.  I learned a lot about myself during our class play, the Wizard of Oz, in which he cast me as Dorothy.  I was humbled to be given such an important part and studied my lines over and over again.  Though I often appeared confident on the outside, I was worried I would mess up the play for my friends.  When I found out I would be expected to sing some of my parts I wanted to run for the hills.  Mr. Conway worked me through a lip sync routine that surely rivaled the later short-lived success of Milli Vanilli's musical career.

Mr. Conway was also the first teacher to make me think I might be able to write poetry.  If you stop by here on a regular basis, you know I dabble in poetry every now and again.  Every time I join the Poetry Friday link up or post a poem here, I think of my fourth grade teacher who first nudged me to try my hand at poetry.  In these attempts, he carefully sowed the seeds of possibility in his enthusiasm for my attempts.  Tonight I went digging for a poem he returned to me several years after I graduated.  He handed it to me many years later knowing that surely I must still be writing poetry.   Apparently even as a fourth grader I had a thing for nature poetry.  I am comforted, however, to know I no longer feel the need for rhyme. 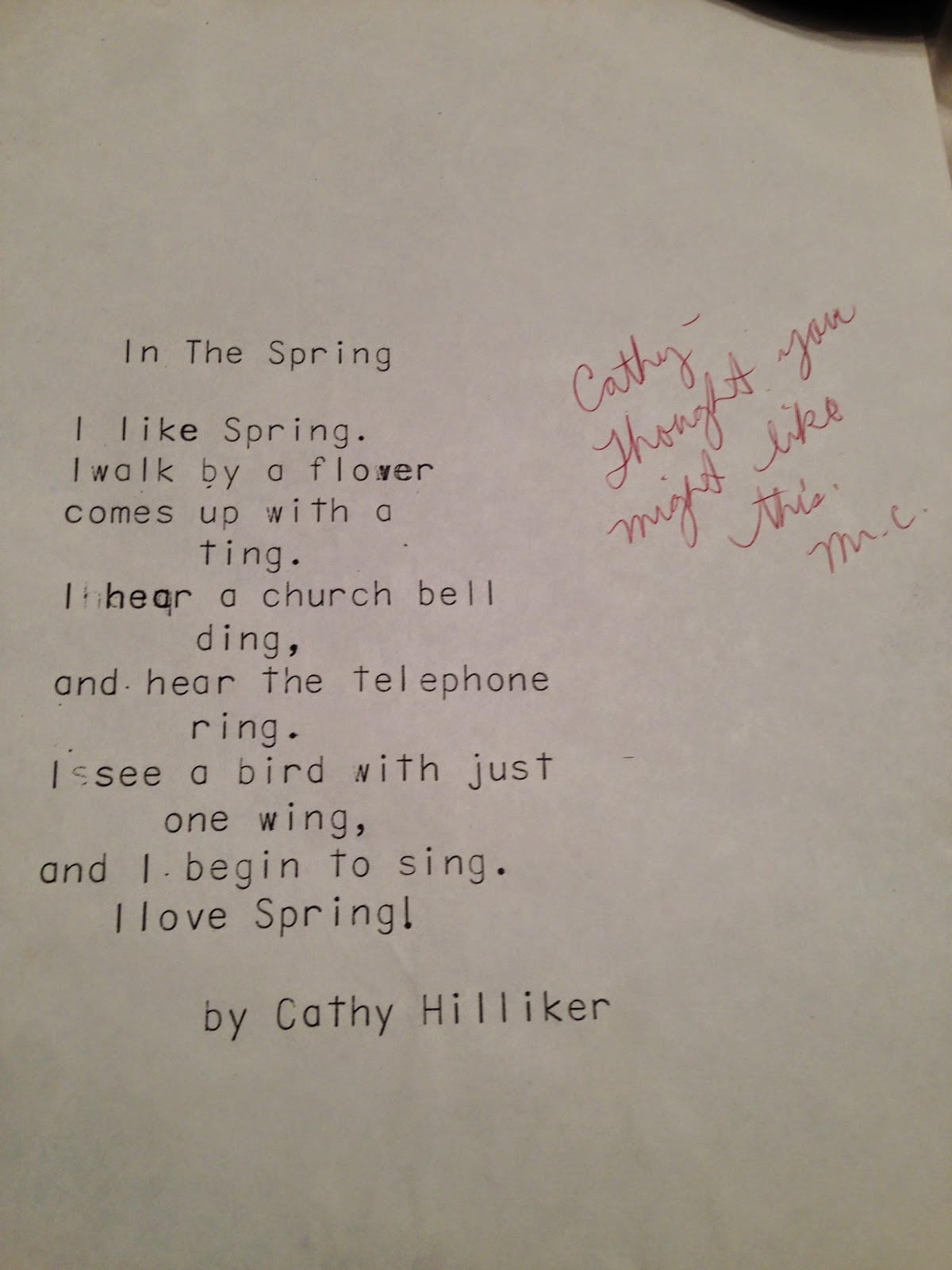 Mr. Conway helped instill of a love a literature and story.  He was the first teacher I remember reading aloud, though I am certain other teachers read aloud before Mr. Conway.  It's hard to forget the way he would spend time each day after lunch reading chapter books to our class, his voice rising and falling with every word.  We enjoyed the antics of Mrs. Piggle-Wiggle, the adventures of James and the Giant Peach, and the life of The Mouse and a Motorcycle.  After lunch each day he'd pace around the room reading to us; leaving us hanging at the end of each afternoon so we couldn't wait until the next day.  Our class was a bit of a challenge.  Since it was only Mr. Conway's second year, I'm sure we caused him many a sleepless night, but read aloud was the one time a day where I remember everyone sitting quietly captivated.  Music tames the savage beast, and beautiful words can calm the craziest of fourth graders.

Mr. Conway taught me to make decisions and think for myself.  He believed in personalization before it was cool.  In math, we worked through chapters at our own pace and he consulted with us as we worked.   I enjoyed being able to work at my own rate and having an opportunity to be in charge of my own learning.

Though Mr. Conway has lost this final battle, I am thankful to have walked the path beside him if only for a short time.  He helped me to see far out into the future and paved the way for the many steps that would follow on this journey.  Jackie Robinson said, "A life is not important except for the impact in had on other lives."  His impact was felt by many.  I only hope my students will some day be able to say the same.